Home
Gout and Diet
Grains
Bread and Gout – Is Bread Bad for Gout?

Gout has gained a reputation of its own, yet it is actually a form of arthritis. The bad news is it can cause excruciating painful sensations around your joints – it usually affects feet, but other joints are also exposed to it. The good news is that while arthritis in general cannot be cured, gout has various medications and treatments to prevent attacks and pains.

Gout is usually caused by the uric acid. Instead of being eliminated, it accumulates around joints. It causes crystals that look like tiny pieces of glass. As a direct consequence, any movement of the affected joint will be incredibly painful. Apart from the actual treatment, gout also has a bunch of naturist approaches and most of them have something to do with the diet.

You might ask yourself now – is there a connection between bread and gout? Can you eat bread?

Understanding the connection between your diet and gout

So, you know uric acid can cause gout. But then, you want to dig a bit deeper – what causes the uric acid? The acid is obtained as the body breaks purines down. Such substances are natural in your body – you can also get them from your diet.

The uric acid is cleared out through the kidneys. But if there is too much of it, kidneys cannot cope with the extra. Therefore, the uric acid remains in the blood and turns into crystals – the main causes of pains and inflammation. Such crystals tend to accumulate in certain joints – mostly around the big toe.

Now, the connection between your diet and gout is in the purines. While natural in the body, purines are ingested in large amounts through your diet. From this point of view, you need to determine foods with high and low amounts of purines and adapt your diet.

Studies have confirmed that a diet is efficient when your gout is mild and attacks are rare. If you experience severe problems and the attacks are quite frequent, medication is mandatory. In fact, while it has no side effects, an appropriate diet will never outweigh the benefits of medication.

Amount of purines in bread

The connection between bread and gout is established by the amounts of purines. For example, organ meats, beef and seafood are known for high concentration of purines. Other foods have low amounts, while bread is somewhere in the middle – be it rye bread or white bread.

Is bread bad for gout?

From a different point of view, you should know that gout is also caused by a heavy protein intake – especially animal protein. Practically, protein could be an issue for those with high levels of uric acid in their blood.

On the same note, bread is naturally low in protein. While a whole loaf will have a few grams of protein, the amount is insignificant when compared to other foods – such as meats. At this point, bread and gout do not seem to have such an important connection.

Different types of bread and gout

Now, visit 100 doctors and you will definitely get a few different answers. Ask 100 gout sufferers and you will also get different opinions. From a scientific point of view, wheat bread could be better than white bread.

On the other hand, many sufferers claim they can eat white bread in decent amounts, while wheat bread gives them gout attacks and pains. The explanation? Everyone is different and what works for some people will not work for everyone else.

Bottom line, bread and gout do have a few things in common. Bread is often a controversy when it comes to gout and there is only one way to figure out whether or not it is the culprit in your case – experiment. Simply try white bread for a while and see how you feel. Move on to wheat bread or rye bread. Switch to a diet with no bread at all. Time will tell what works better for your particular situation.​ 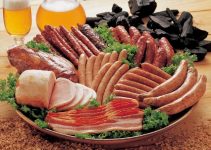